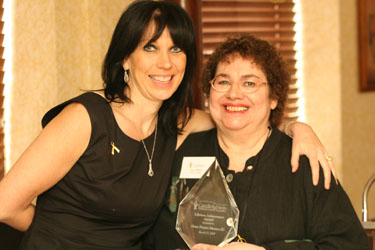 A FAMILY DISEASE: THE BEGINNING

Kathleen Rea Monaco was diagnosed with acute lymphoblastic leukemia in 1968 when she was 18 months old. At the time her mother, Grace Ann, and her father, Larry, also had a newborn son. Given the grim statistics of a cancer diagnosis for a child in those days, doctors did not encourage families to talk to others outside the family about their child’s cancer. At one of the first parent meetings one of the founders commented that it was as if your child was looking through the slat of her crib as if in jail. This was a time when there was no such thing as patient advocates. Childhood cancer was something whispered. This group of parents changed that reality of childhood cancer forever.

While Kathleen Rea was being treated at Children’s NationalMedical Center , Grace and Larry Monaco met the parents of other children who were also being treated for cancer at the hospital. It was a powerful group of families that led to those first parent meetings which included scientists, journalists, government workers and lawyers. With encouragement from their doctors, Dr. Sandy Leiken and Dr. Moasagghi, as well as the nurses and other staff, they began meeting in the hospital parents’ waiting room and anywhere else they could find to talk about how to improve the situation for children with cancer.

There were 25 people in the original group of parents. Bev McGaughy and her husband Bob sparked interest to build a lobbying campaign for clinical trials and appropriations for childhood cancer research. Al Karr was the journalistic bastion of the group, Arnie Weiss was the lawyer. Dick Sullivan had the clout in the government to arrange meeting rooms and parking in the Rayburn House Office Building . The Koltnow’s had a knack for what needed to be said, and Grace, with the encouragement of her husband Larry, had the oration skills which she used to testify repeatedly on Capitol Hill. Dick and Julie Sullivan had the knowledge, expertise and ability to lobby for childhood cancer research and clinical trials; they brought energy and class to successfully approach the Congress on behalf of the children and their families. Bob McGaughy worked with the NIH and so he helped set up the interviews with those in the National Cancer Institute who were grilled on what was in the works, and what needed support to help their children get the most help with their cancer. The doctors at Children’s Hospital along with supporters at the National Cancer Institute provided information for these parents to put into the position papers.

ACCO offers FREE books and resources for children with cancer and their families.
Click on the button to order your free resources!

By 1970, when they weren’t lobbying, visiting, testifying, or writing, the original group of parents began meeting regularly at the Rayburn Building, often inviting speakers. One of their first speakers was Elizabeth Kubler Ross.They taped those meetings to share with families who could not make it. They also created the first Candlelighters newsletter in 1970, and as they traveled throughout the country for their day jobs, they met with social workers and doctors from children’s hospitals nationwide to advocate for parent based support groups at every hospital. Candlelighters officially formed in 1970 under the name Candlelighters Foundation.

These parents blazed a trail, and they made sure their efforts at lobbying congress were for things that they knew were needed, and that were scientifically supported. One of their early successes was getting the Diet Cancer and Nutrition program started and funded in the 1970’s, a 100% parent initiative. They built relationships based on realistic and supportable goals throughout Congress and the NIH and NCI. Through the lobbying efforts of this group of childhood cancer parents, the first appropriations were allocated by Congress towards childhood cancer research. They also created the Childhood Cancer Ombudsman Program under the Candlelighters name in 1970. They built a network of volunteer doctors and lawyers who gave free opinions on issues such as treatment choices, informed consent, employment discrimination against parents, education discrimination, access to military service, and barriers to insurance.

Candlelighters moved from Grace and Larry’s home into their first office at the American Cancer Society’s building in the mid 1970’s. Marvella Bayh, wife of Senator Birch Bayh, laid the groundwork to get funding at the national level for the rapidly growing organization. In 1980, the American Cancer Society (ACS) began funding Candlelighters under their umbrella and they moved into their own independent office. Julie Sullivan was the Executive Director through all of this growth, Lucy Gritzmacher was the librarian and Yvonne Sophomonoian provided the strength and assistance to keep everything moving smoothly.  At the same time, Candlelighters began to actively build a network among local organizations of parents of children with cancer across the country. Grace and other parent leaders continued to travel to speak with parents in local communities and hospitals and help them form local groups linked to the growing national network. To support the formation of new groups and continue the network building program, a hand book was created by Minna Nathanson in 1986. This handbook was expanded upon and updated in 2000 by Mark Chesler and Sara Eldridge. You Are Not Alone remains a valuable resource today. Its counterpart, Your Group Is Not Alone assists with the development of support groups on an international level, with a special emphasis on developing countries.

By the mid 1980’s Candlelighters began to broaden the Board of Directors from families living near D.C. to recruiting parents from around the nation to help provide leadership to its growing constituency. The national office continued to expand and develop educational materials (the original book entitled Educating the Child with Cancer book was published in 1993), produce a national newsletter, run the ombudsman program, provide financial advice and medical referrals/searches, and leadership training workshops for parent leaders of local childhood cancer support groups. In 1990, Candlelighters held its first nationwide meeting of parents of children with cancer. At this 20th anniversary of Candlelighters several hundred parents and parent group leaders gathered in Washington, D.C. to meet other parents, learn coping strategies, share group organizing and program tactics, listen to pediatric oncology experts, and lobby their congressional representatives about funding for childhood cancer research. A similar reunion was held in 1995 commemorating the 25th anniversary of Candlelighters. During the 1990’s, the national network had expanded across the country and had links to parent organizations in Canada, Japan and Europe.

During this period of growth Candlelighters continued to be facilitated by the financial support from the American Cancer Society. It was often a balance to maintain its independence from the professionally directed and medically focused adult priorities of the ACS. In the mid 1990’s the ACS and Candlelighters decided to end their financial arrangement, while maintaining their professional collaborations and ties. This gave Candlelighters the opportunity to be independent from ACS with regards to the different focus in their missions, but it also meant a substantial loss in income and infrastructure. It took Candlelighters several years to restructure and reorganize their staff and their funding.

During this time of restructuring the organization, Candlelighters leaders played a significant role in the formation and growth of the International Confederation of Childhood Cancer Parent Organizations (ICCCPO). This is an international network of educational and advocacy groups devoted to improving the holistic care of children with cancer and their families worldwide. Parent groups in many nations have built their own organizations based on materials and programs developed by Candlelighters, and Candlelighters continues to collaborate with groups in the more than 75 countries represented by ICCCPO.

In 1991, after 20 years, Grace Monaco stepped down from the day to day work with Candlelighters. She stayed with the Childhood Cancer Ombudsman Program which separated from Candlelighters in 1995 and she along with others expanded their mission. Grace has continued to be a mentor, supporter, advocate, and role model for Candlelighters on the national and local levels, and for families of children with cancer everywhere.

Candlelighters’ represents families who are navigating one of the most deadly diseases that a child can be diagnosed with. From the beginning, the founders of Candlelighters emphasized that this disease has an impact on every member of the family. These original families pulled together the foundation of parent to parent support groups throughout the country while fighting and lobbying for more research for childhood cancer. The siblings were an integral part of this picture as well and the impact on their lives was not overlooked. They were the ones at home with a grandparent or one parent while their brother or sister was in the hospital with another parent, or while their parents were busy advocating for more support and research. Whatever the outcome of their siblings’ illness, they also sacrificed a portion of their childhood to this disease.

In 2010, Candlelighters Childhood Cancer Foundation changed its name to the American Childhood Cancer Organization (ACCO). It has successfully rebuilt after restructuring in the mid 1990’s. We have over 100,000 families in our network and growing, with 40 affiliates and divisions serving families at the local level across the country. Our social media presence continues to grow and we have expanded our books to provide resources for preschoolers, elementary and adolescent aged children diagnosed with cancer, siblings, and educators. Our website receives more than 3 million hits annually and we sponsor the largest the childhood cancer awareness event in the country each December. In 2006 we once again focused our attention on advocating for the need for innovative research which brought our organization full circle from our beginnings in 1970. Advocacy continues to be a large and important part of what we do— speaking for the children, adolescents, and families from the perspective of those who have walked this journey before them. ACCO is built on a strong foundation of patient advocacy, and our legacy is one of leading the way for patients, survivors, and families to participate in the national dialogue on child and adolescent cancer.

Many thanks to Grace Ann Monaco and Mark Chesler for taking the time to provide information and history for this section!