The story detailed below is an account written by Chad’s mother, Michelle. After graduating high school on June 3, 2020 – Chad looks forward to attending Florida Atlantic University in the fall! 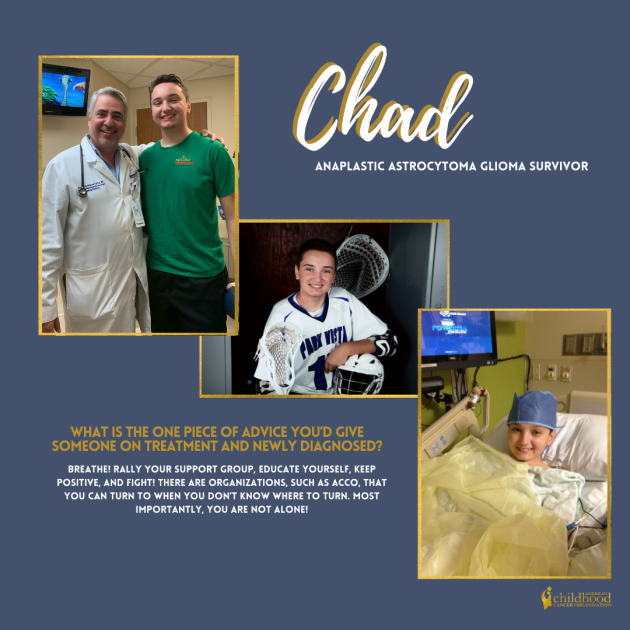 Chad had a seizure that lasted a few seconds. We had thought that he had fainted due to low blood sugar, but when we brought him to the emergency room, his skin indicated a baseball sized tumor. On February 25, 2015, Chad was diagnosed with anaplastic astrocytoma level III glioma that had metastasized to his spine.

Chad had immediate brain surgery, but five smaller tumors, that had metastasized to his spine, were inoperable. He began chemotherapy, had constant body scans, blood counts, port implementation, port flushes, spinal taps, and therapy because he had to learn to walk again.

In the blink of an eye, our entire world changed. There were obvious emotional and physical obstacles. Chad was an active kid. He was involved in sports and had many friendships. Due to the nature of his cancer, the viruses he contracted, and his physical setbacks, he was isolated and unable to do any of those things that he used to do. His world completely shut down. He was isolated from his friends, he had to learn to walk again, and he didn’t know when or if he would ever leave the hospital. We began a Facebook page called TLC for TCL #TeamChadLeventhal and the outpouring of support, through pictures, was priceless. It helped him realize that he wasn’t alone. We received literature and support from ACCO that helped our entire family. Chad was able to fight and push through. He learned to walk again and played high school sports! In many different capacities, virtually, in person, or via telephone, he kept up with his studies and was able to graduate high school, on time, with honor cords! Chad never rang a bell. His hospital didn’t have a celebration.

ACCO has helped Chad’s cancer journey by providing educational material, positive conveyance of success stories, support and the like, we were able to educate ourselves and realize that we are not alone.

Chad will continue his positive outlook and would like to assist other teens that are going through what he has been through. He has volunteered at brain cancer 5K‘s, Make-A-Wish events, etc. He still has scans every six months, but we have faith that they will be clear!

What is one piece of advice you give someone on treatment or newly diagnosed?
Breathe! Rally your support group, educate yourself, keep positive, and fight! There are organizations, such as ACCO, that you can turn to when you don’t know where to turn. Most importantly, you are not alone!

Together, we can make a difference.
Donate today because kids can’t fight cancer alone®.