The American Childhood Cancer Organization is a key leader in providing a voice within the halls of Congress for children and families affected by a childhood cancer diagnosis. We believe the urgent cries of children with cancer have been silenced by hospital walls for too long. Each child is special and should be valued, not treated as a faceless statistic. We believe personal stories matter – when shared with elected officials they are our most powerful weapon in the fight against childhood cancer. With the recent implementation of a new grassroots advocacy software system called Voter Voice, we’ve made it easier and faster than ever for our advocates to take action to contact elected officials at the state and federal level from home, or even the hospital.

In the summer of 2018, the Childhood Cancer Survivorship, Treatment, Access, and Research (STAR) Act of 2018 into law. The STAR Act of 2018 authorizes Congress to put $30 million annually for 5 years into pediatric cancer including bio-banking and studies of survivors. 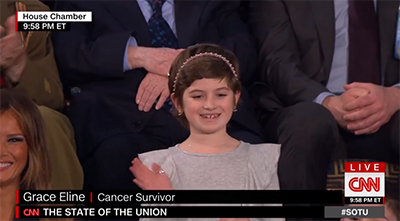 The State of the Union

In addition to the STAR Act, additional funding towards Childhood Cancer research and building a comprehensive database was announced during the 2019 State of the Union (SOTU) Address. ACCO’s Ambassador and 10-year-old brain cancer survivor, Grace Eline, was present during the SOTU when it was declared that “Many childhood cancers have not seen new therapies in decades” and the proposed federal budget will ask the Congress for $500 million over the next 10 years to fund this critical life-saving research. The $50 million annual allocation towards childhood cancer increase the budget 11% increase over the $462 million National Cancer Institutes (NCI) and other National Institutes of Health (NIH) institutes expected spend.

In the past year, ACCO gave children battling cancer as well as childhood cancer survivors a voice as a multitude of health insurance policies were debated that directly jeopardized their lives. Our advocacy emphasized the importance of maintaining the requirement for any proposal to cover essential health benefits while prohibiting annual or lifetime caps on coverage. We also spoke out against allowing states flexibility to limit or even exclude coverage for children with cancer because of pre-existing conditions. Additionally, we stood up for the one-third of all children diagnosed with cancer who depend on Medicaid to provide life-saving treatments by opposing drastic cuts in funding.

In the past year we’ve also empowered advocates to be a part of the passing the RACE for Children Act – a revolutionary piece of drug development policy that will promote access to the latest cancer drugs being developed for adults that have a common molecular pathway in pediatric cancer types. This will help ensure children have access to new cancer treatments too. Currently stakeholders are participating in public meetings to determine the list of molecular targets to be included by the Federal Drug Administration as a result of the Race for Children Act.

We are very excited that on June 5, 2018 – after three years and thousands of you took action – the Childhood Cancer STAR (Survivorship, Treatment, Access, Research) Act was signed into law! The most comprehensive childhood cancer legislation ever to be considered by Congress, this bill will increase overall pediatric cancer research funding at the National Institute for Health as well as expand research about the complicated issues of long-term survivorship; improve data collection for better outcomes utilizing shared information; and ensure childhood cancer has improved representation on the National Cancer Advisory Board.

Now the STAR Act needs to be fully funded each year for the next five years. Visit our Take Action center to stay up to date on our progress and take further action to keep the STAR Act moving.

Finally, we are proud to serve as a key member of the Alliance for Childhood Cancer, a collaboration of over 30 national advocacy groups uniting together towards one key purpose, ending the devastation of childhood cancer. As part of the Alliance, ACCO serves as a part of the Policy Workgroup to guide overall decision-making for legislation, policy, and initiatives the collective organizations will support. In addition to legislation, as a part of this collaborative the ACCO joins other members in advocating for increased funding for childhood cancer research in the National Institute of Health and the National Cancer Institute.