Statistics on child and adolescent cancer incidence are collected by the National Cancer Institute’s (NCI) SEER Program (Surveillance, Epidemiology and End Results). The data is collected at 10 sites (5 states including CT, UT, NM, IA, and HI and 5 cities including Detroit, Atlanta, San Francisco, Los Angeles, and Seattle), with each representing different geographic regions of the United States. The data is then extrapolated to represent national childhood cancer data. The following monograph link summarizes childhood cancer incidence and mortality by disease type, age, ethnicity, and sex. Data collected through SEER has shown that the incidence for some types of childhood cancer have increased slightly since Candlelighters’ inception in 1970, but for the most part the rates have been fairly constant in the last several years.

ACCO offers FREE books and resources for children with cancer and their families.
Click on the button to order your free resources!

Because Statistics Don’t Tell the Whole Story: A Call for Comprehensive Care for Children With Cancer, by Board member Dr. Jennifer Cullen, PhD, MPH.

A Family Disease: The Financial Impact of Childhood Cancer

Survival comes with a cost. Two-thirds of those who do survive face at least one chronic health condition. One quarter of survivors face a late-effect from treatment that is classified as severe or life-threatening. Late-effects of treatment can include heart damage, second cancers, lung damage, infertility, cognitive impairment, growth deficits, hearing loss, and more. It is becoming increasingly apparent that childhood cancer “is for life.” Late effects from either the disease process or aggressive treatment regimens are given at a time of life when children have growing bodies and developing brains. As such, patterns of late-effects include disabilities, chronic health conditions, and even subsequent battles with additional cancer. It is imperative that all survivors of childhood cancer receive on-going monitoring and continued physical and psychosocial care throughout their adult lives. 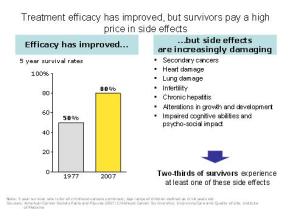 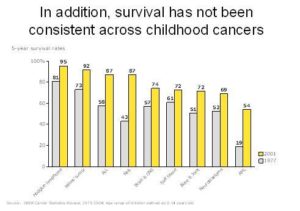 Federal funding for childhood cancer research is predominantly allocated through the National Cancer Institute (NCI). Funds are distributed to Principle Investigators (scientists) working at labs which are often located at Children’s hospitals across the country (extramural research); to the Children’s Oncology Group to fund clinical trials (extramural research); and to labs within the NCI (intramural research.) Each year, Congress approves the amount of money that the National Institute of Health in Bethesda, Maryland will receive for research initiatives. Cancer will be funded in 2009 at a level of approximately $5.6 Billion. In 2007, the NCI reported that the combined extramural and intramural funding for childhood cancer research was approximately $180 million. However, this estimate could be regarded as liberal as some of the associated research might not be perceived as directly benefiting childhood cancer. Other more conservative estimates, put childhood cancer research funding as low as $30 million annually.

As individuals and organizations supporting our nation’s children and adolescents with cancer we too can take a strong stance for our cause with both federal and private research funding. Breast cancer is the sixth most common cause of death by disease of women in America (behind heart disease, stroke, lung cancer, respiratory disease and Alzheimer’s). In comparison, cancer is the number one cause of death by disease of America’s children. In terms of person years life lost (PYLL), the average age at diagnosis of breast cancer is 61, with a calculated 16 PYLL. In contrast, the average age that a child is diagnosed with cancer is 10. This calculates to 67 PYLL. Sixty seven years of life lost when a child dies from cancer.

Our call to action is to increase the awareness of the incidence and devastation of this disease on America’s children. By raising awareness of the fact that childhood cancer remains the number one disease killer of America’s children, we can raise the awareness of the need for greater research funding. Like breast cancer, childhood cancer has an international symbol “the gold ribbon. The gold ribbon was created by parents of children with cancer and former CCCF board member Gigi Thorsen. Its first production as a lapel pin was funded by CCCF in 1997. Working together, we too can become successful cancer advocates through the promotion of the gold ribbon for childhood cancer, so that we too can build research funding and much needed cures for America’s littlest cancer patients.

This data has been collected from an independent survey sent out by ACCO to over 1,700 of our families.