The story detailed below is an account written by Alex’s family. Alex is a High Risk Pre-B Cell Acute Lymphocytic Leukemia survivor. 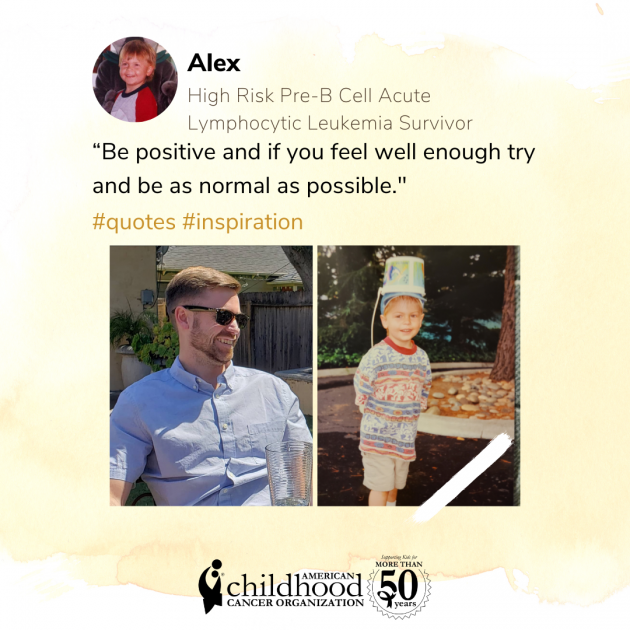 Alex just wasn’t acting like a typical 2 year old. He had low energy and all he wanted to do was lie on the couch. It was a slight nose bleed that had us taking him into his pediatrician.  One look at him and he knew there was something wrong. He ordered labs and we were on our way to Lucile Packard Children’s Hospital in Stanford the next day.

Treatment consisted of just under three years of chemotherapy. Alex was on a study so he got high doses of all of his chemo. He actually handled it all very well. He had several unscheduled hospital stays with pneumonia including New Years Eve in 1998. He finished treatment the day before Thanksgiving in 1999.  We had a lot to be thankful for that year.

ACCO’s gold ribbons were our favorite, especially at Christmas.

Alex graduated from the University of Oregon in 2016 with a degree in business with an emphasis in sports marketing.  He is now a concept shoe buyer for Adidas in Portland. He’s in the basketball, tennis and golf divisions. He enjoys living in Portland.

His plans were to just enjoy his life. He had a great time in high school. He was Co-Captain of his Varsity basketball team. They were league champions his senior year and they made it to the CIF finals and to STATE. He loved college and really enjoyed being an Oregon DUCK.