“Reason this person is a Gold Ribbon Hero: He got osterosarcoma at 15 years old and begged to keep his leg the tumor was in his shin so he had full donor bone and plates put in.  Then the hard core chemo be gain again. The over dose was killing him and uva actually sent him home with hospice to die.  We wasn’t giving up so easy took him to Cleveland clinic where he was in full body organ shut down. His heart was also destroyed.  He was then sent to Cincinnati children’s hospital where they totally helped get his organs a bit happier but still in heart failure.  He had to be 2 years out of chemo before he got his new heart in the years waiting he had 3 open heart surgeries last one to implant the lvad. He was doing good 8 months to the date he got discharged to go home for a little while. He only had2 more months to wait for his new heart at this time.  He was home 3 days before rushing him back to the hospital where 2 days later he passed away from septic shock. All the fighting and never giving up then he dies from an infection.  We are devastated. This boy was a true meaning of what a hero is. He was truly amazing and wanted to live so badly never complained about pain he just wanted to live. He made me so proud and surprised many many doctors.  Tyler Wiseman is a true meaning of a true HERO” – Shelley W. 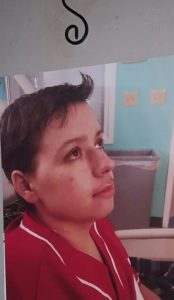 “Reason this person is a Gold Ribbon Hero: Katie is our little miracle baby, born 17 years after her big sister we had long ago given up hope of having another baby. At three weeks old she was put on digoxin and Lasix because she was born with two holes in her heart and pulmonary stenosis. It started a long three years of meds and tests and worry. But she surprised all her doctors and amazingly in time her heart was able to heal itself, she no longer required meds and the artery had widened and one hole has closed and the other has grown much smaller. In May 2016 her cardiologist declared Katie would never need surgery. We were exstatic. Just a month later on June 21st, 2016 we began a whole new battle for her life, when Katie was diagnosed with leukemia. She had a biopsy and port placed and started treatment immediately. After six months of intense chemo Katie is doing great, she is in remission and started maintenance chemo on Dec 29th, 2016. Katie has already faced so much in her 4 short years but she is strong and a trooper, Our little warrior. Katie loves dragons and dinosaurs and babies and being outside. Her favorite thing is hanging out with her peeps (her two nieces and three cousins). She is always smiling and happy. We know she will overcome this too. Her story is on Katie’s Krusade on Facebook.” – Susan G 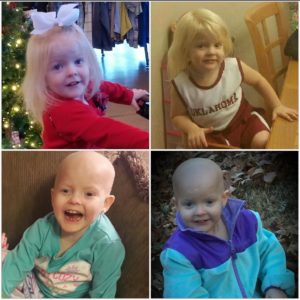 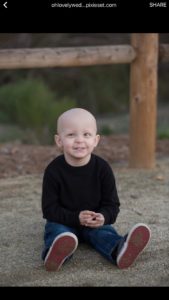 “Reason this person is a Gold Ribbon Hero: Evan is my brave and loving two and a half year old. On August 7th Evan was taken into the hospital for having a swollen abdomen. After tests and tears he was diagnosed with Stage 2 Clear Cell Sarcoma of the Kidney cancer. In less than 48 hours after having his kidney removed he was playing in the hospital, walking and laughing. His laugh is the best. He also has a fun little smirk that no ladies can resist. Evan is my hero and has touched lives across the country. Evan doesn’t complain about being in the hospital or clinic. His spirit and courage radiates in all he does. Evan is also the best big brother to Madison. If she cries he does his best to make her happy. Acting silly is his specialty. I love my #Toddlershark to the moon and back forever and ever.” – Colleen M

“Reason this person is a Gold Ribbon Hero: In April of 2012 My son Steven was 19 when he was diagnosed with testicular cancer.  His diagnosis came 8 months after my 10 year old daughter Katrina was diagnosed with Acute lymphoblastic leukemia.  Having 2 children going through chemo at the same time was challenging to say the least.  Steven had surgery and completed 2 rounds of chemo. As soon as he was done with his last round he said ” ok I am fine now let’s focus on Katrina” .  That is exactly what he did.  Today Steven is a proud father to a one year old little boy and is expecting another son in March…” – Teresa P 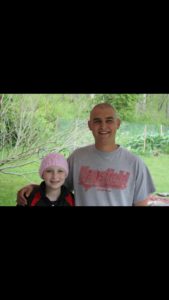 “Reason this person is a Gold Ribbon Hero: My daughter fought CHILDHOOD Bone Cancer(Osteosarcoma) for 2 years, before passing. She was diagnosed at age 12, after finding a tumor on her left tibia. She endured 10 months of the normal chemo protocol for this type of cancer, along with a knee and partial tibia replacement. She finished chemo, only to have an amputation 3 months later, due to damage from chemo. She then, another 3 months later, relapsed. Chemo no longer worked, and eventually spread to her brain, causing her passing. She lived her life inspiring others, and being from a small town, she left a huge imprint on many hearts! She always had a smile on her face, and if it wasn’t for the obvious leg, you would never know she was sick. She enjoyed life. She handled the news of her passing with the most strength I had ever seen in her! She dreamed of attending prom, as her passing was to take her before she would finish the 8th grade. Her dream came true, as the local community came together and arranged for her to attend prom, her older brother along side as her date. He had graduated the prior year, so neither of them were students there, but the school was happy to let them attend. It was one final great lifetime experience that my two children would share. My daughter spent the next day in excruciating pain, and then passed the following morning! She lived, and passed with more courage than I have ever seen! Her brother was her hero, and she was ours! This is a picture of my daughter and son, just 36 hours before she passed.” – Melony S 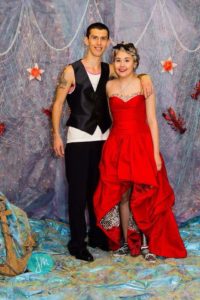 “Reason this person is a Gold Ribbon Hero: 6 years old had brain cancer at age 3 now has leukemia at age 6 always smiling never complains. Has had months and months of chemo. Stem cell transplant still smiling my grandson my hero” – Sandi P 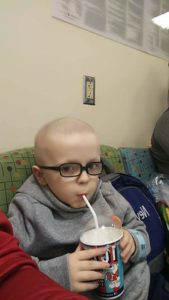 “Reason this person is a Gold Ribbon Hero: Molly was diagnosed with hypodiploid ALL in August of 2014 and had a bone marrow transplant in December of 2014.  She missed her entire freshman year of high school.  She is taking a stand against childhood cancer by being an ambassador for iDance4aCURE.” – Christy B 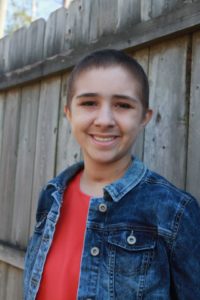 “Reason this person is a Gold Ribbon Hero: Emma has been fighting the battle with Neuroblastoma since she was 11 months old. She is now six years old and is fighting.” – Lisa W

“Reason this person is a Gold Ribbon Hero: Caylee was 4 yrs d when she was diagnosed with AML and rare mutation.  She did amazing with her first round of chemo and handled losing her hair very well. Round 1 failed and fevers started in before we started round 2 to try again. Through the 2nd round of chemo she vomited a lot, had a 12 hr nose bleed and for almost 4 weeks she rarely had a fever under 103 with constant reducers. Through everything she still kept her spunk, her sass and her sense of humor…never complained and took everything in stride. She gained her wings after a 62 day fight. She always said her brother was bigger than she was but she had more brave in her.” – Jill G 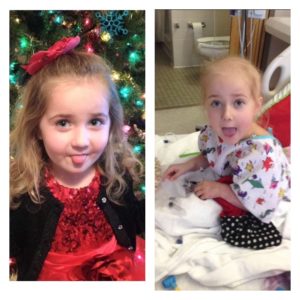 “Reason this person is a Gold Ribbon Hero: Isaiah was only 8 months old when he was diagnosed with a medullablastoma brain tumor. It was smaller than a tennis ball, larger than a golf ball. The tumor caused him to stop crawling and “failure to thrive”.
Before he could even walk, he began chemotherapy and radiation. The first two years of his life were spent fighting. He learned to crawl again, and quickly with the help of his siblings learn to walk.
All throughout his battle he brought his family much joy and laughter.
Isaiah is now 11 years cancer free, 14 years old and a freshman in high school. He has suffered some hearing loss, some dental damage due to radiation treatment and his growth has been slightly stunted. He continues to make us smile, laugh and at times scratch our heads and what a miracle he is to us.
He doesn’t remember much, that is my burden/gift to carry as his mother and caregiver. He is my inspiration.” – Karen A 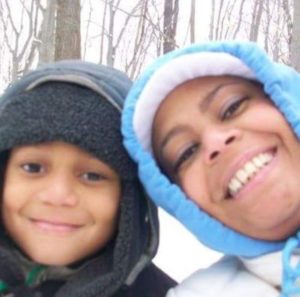