Each September we hope to raise much needed awareness for childhood cancer and we can’t do that without your help. To start, please take a moment to share this page on your social media profile, in an email or however you would like with your community by copying and pasting this website address https://www.acco.org/blog/childhood-cancer-awareness-month-2016/. Then, learn about the many ways that you, your family and friends, and your community can help:

Go Gold®: Change you profile, cover and header images on your social media to gold or gold themed images. Ask everyone you know to show their support by changing their images to gold themed images. You can also wear gold, host a “Go Gold®” event or think of any creative way to share gold this September. Although many colors were considered, gold was agreed upon as the ideal choice for childhood cancer awareness because gold is a precious metal, and is therefore the perfect color to reflect the most precious thing in our lives—our children. Click Here to learn more about Childhood Cancer Awareness Month. (“GO GOLD®” and “GO GOLD for Kids with Cancer®” are registered trademarks of ACCO. ACCO registered the marks to protect the identity of the gold ribbon and GO GOLD expression and its derivations to the childhood cancer cause.)

Host an Event: ACCO offers many ways for individuals, corporations, schools and any other groups to host ACCO signature events to help support children and teens with cancer. We help organize your event, provide prizes and event materials, a website portal for groups, team and/or individuals to collect donations, and depending on the size of your event, provide marketing options. Click Here to learn how to get involved.

Supporting the STAR Act: What could be a better way to kick off September as Childhood Cancer Awareness Month than adding your support to the most comprehensive childhood cancer bill ever in US legislative history: the STAR Act! We need your help reminding Chairman Upton that this bill is important and that it deserves a hearing! Click Here to learn more about how you can help.

There are so many wonderful and creative ways to help raise awareness about Childhood Cancer, and we are honored to help you however we can. If you would like to learn more or discuss your ideas about raising awareness this month, please feel free to Contact Us Here. We can’t wait to help you Go Gold® for kids with cancer this September! Please take a moment to view all of the many options on our website.

For additional information about childhood cancer or on the ACCO, or to order resources for you or your child, please visit our website at www.acco.org.

Join Us to GO GOLD for Kids With Cancer®! International Childhood Cancer Awareness Month, September 1-30, 2016, is coming up fast and we want to be ready with more GOLD LIT buildings, landmarks and locations around the world, starting with your area.
As the only U.S. member of Childhood Cancer International(CCI), ACCO invites you to GO GOLD® by joining the global campaign to LIGHT UP THE WORLD GOLD this September. To assist you in this awareness effort, we have prepared a request letter and submission form for you to use to reach out to location contacts in your area and beyond. Please feel free to cut/paste the letter to distribute or share the distribution form link to those who can help
Light Up Hope – Light IT UP GOLD!
LINK FOR THE LETTER:
https://www.acco.org/wp-content/uploads/2016/05/Go-Gold-Letter-2016.pdf
REGISTRATION LINK
(CLICK LINK AND SCROLL DOWN PAGE TO FORM):
https://www.acco.org/light-up-the-world-gold/
We ask that you please register your participation by completing the submission form below so that we can track the success of this united effort and to raise awareness of the global burden of childhood cancer. When completing the form, please be sure to attach your photos after the event so we can include them in the album, our blog, social media, add them to the interactive map and continue to raise awareness!
To see the countries and locations of committed locations to date simply scroll down past the album and view the
Light Up Hope Map towards the bottom of the page.
Thank you for your support of this important awareness effort to GO GOLD®!

Together with its international partners, this year the American Childhood Cancer Organization issued a global challenge—to light up the entire world gold to raise awareness about this deadly disease—and the response was simply incredible!  In support of September as International Childhood Cancer Awareness Month, more than 100 prominent buildings, national landmarks, and iconic monuments across four continents helped spotlight the dire challenges posed by this disease by lighting up gold or prominently and proudly displaying the yellow ribbon, the international symbol of the fight against childhood cancer.  The ACCO would like to thank the thousands of people around the world who came together in support of this important cause and helped us “Light It Up Gold”!

Throughout the entire month of September, the world shone with gold: the now internationally-recognized color of childhood cancer symbolizing the brave young warriors and their families who have fought childhood cancer and won, those precious children who have left us far too soon, and the survivors who struggle daily with the long-term effects of childhood cancer and today’s outdated treatment protocols.  From the most well-known national monuments to the parks of the smallest towns, from the tip of South America to the top of Canada and across the entire globe, the world came together to show these children and their families that they are not alone.  We cannot hope to list here in this limited space all of the places that proudly displayed their support, but here are just a few highlights:

For a complete listing of all the buildings and landmarks that participated in this year’s amazing Light It Up Gold campaign, we encourage you to visit the ACCO’s interactive map which you can find at https://www.acco.org/light-up-the-world-gold/. 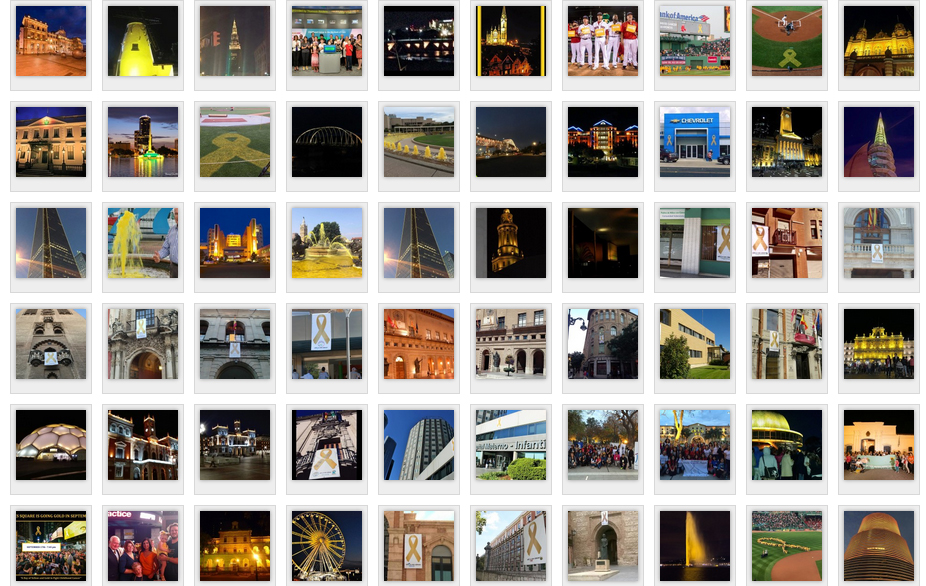 Light it Up Gold Campaign

More than 100 prominent buildings, iconic landmarks and monuments on 4 continents around the world participated in the international gold lighting program to raise awareness for childhood cancer. This program was founded in the U.S. by the American Childhood Cancer Organization who hosts an interactive map acknowledging those who took part in their LIGHT IT UP GOLD campaign during the month of September, which is International Childhood Cancer Awareness month. The gold ribbon is the international symbol representing childhood cancer.

“We couldn’t have had such a successful program without the help of our wonderful volunteers who really got behind this effort,” said Ruth Hoffman, Executive Director for ACCO. “And we can’t send enough thanks to the owners of the buildings and landmarks for shining a light the #1 non-communicable disease cause of death for 90,000 children each year, in both developed and developing countries. We look forward to working with everyone again next year to make 2016 even more golden!”

Several types of childhood cancer are now curable; yet in developing countries, as few as 2 out of 10 children/adolescents survive as a result of a lack of access to essential medicines and treatment. In developed countries, 8 out of 10 children/adolescents will survive their cancer 5 years or longer. LIGHT IT UP GOLD will spotlight the need to stop the dying of our world’s children with cancer!

“Our Volunteers really knocked it out of the park in working with the stakeholders at these locations that either changed their lighting to gold or prominently displayed large sized gold ribbons,” said Neal Rourke, International Tribute Lighting Program Volunteer Coordinator. “We are really appreciative of their efforts to make this program a success.”

About American Childhood Cancer Organization: The American Childhood Cancer Organization (ACCO) is the nation’s largest grassroots organization at the forefront of the crucial battle against childhood cancer. The ACCO is dedicated to improving the lives of children living with childhood cancer and its long-term impacts, and to offering critical advice, support, and assistance to families engaged in this life-altering struggle.

In response to The White House turning color in support of the Supreme Court decision favoring LGBT marriage, ACCO reached out to our contacts in the White House with the request that it be turned gold in September. ACCO respects the following response that we just received back from the White House office an hour ago. As opportunities arise and policies change, we will continue to reach out to the White House on behalf of our childhood cancer community. 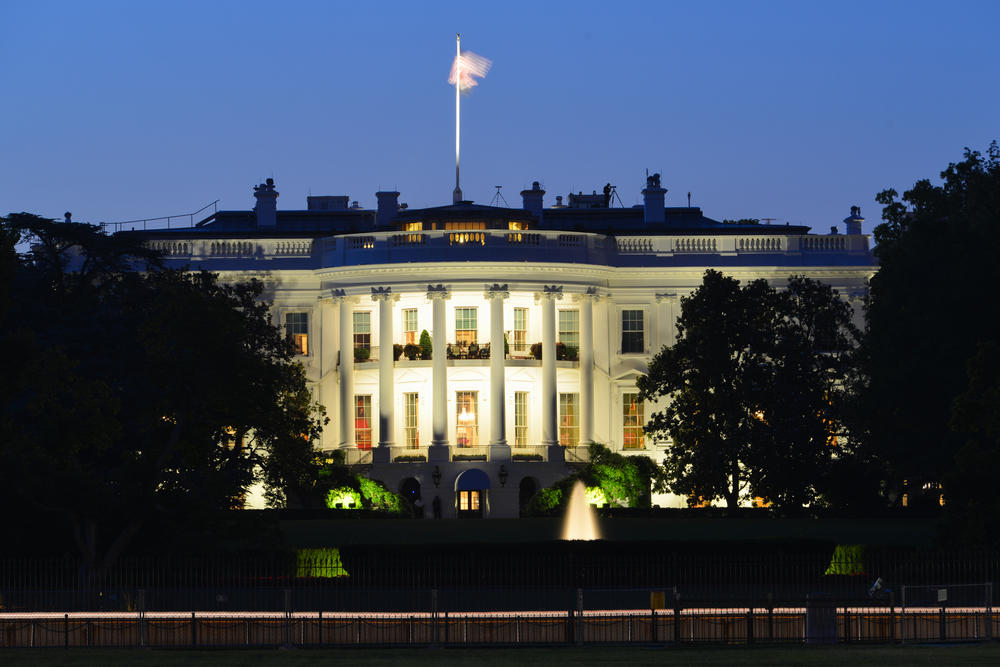 Thank you very much for your email and for the positive support for the LGBT community.

We have asked about lighting the WH up on behalf of requests that have come in, and for pediatric cancer specifically. As I’m sure you know, many diseases and advocacy groups have a color they use for awareness and the number of requests have been very high since 2009. Unfortunately a policy was set that we would not be able to add additional annual light ups. Bill Clinton and George Bush each chose one during their Administrations; breast cancer and HIV. The White House kept those two on behalf of past Administrations. The LGBT lighting for the Supreme Court decision was a one time historic event so the policy was lifted for that one time, but won’t be annual.

We have asked if the policy will change in the future and will continue to pursue it. Thus far it seems as though adding an annual lighting, or choosing only some of the many awareness colors out of the requests we’ve received is something we won’t be able to do, at least for now.

Thank you again, and please be in touch. We’ll absolutely keep you posted if anything changes.