“Alysa is fighting brain cancer for the second time. Dispute the odds they gave her , she still has a smile on her face ! She is an inspiration to many many people that know and love her. She is truly my hero!!!” – Eva E

“Shes had cancer three times as a baby. When she was two years old she lost her leg to Rhabdomyosarcoma. When she turned 5 she relapsed and had the same cancer in her abdomen. When she was 8, she relapsed again and had the same cancer in her left knee. She has been through Chemo, Radiation, blood transfusions. All the 9 yards. Shes an inspiration for so many people. She recently help a fund raiser for Childhood Cancer Awareness and got $263.50! Im so proude of her! She has mever gave up! ” – Keith C

“Mickey’s son was diagnosed with Neuroblastoma, a deadly childhood cancer, in 2004 at the age of 2 and passed away in 2009 from this awful disease. In honor of his son, Mickey started Cody’s Crew Foundation, a grass roots organization committed to raising money for neuroblastoma research. He and his team believe that one child lost to neuroblastoma is one child too many. Cody’s Crew mission is to help fund the brightest and best doctors and scientists who are working towards new treatments and a possible cure for neuroblastoma. Since Cody’s Crew Foundation’s inception, Mickey and the Foundation have raised approximately a quarter of a million dollars towards this effort. Here are two links that you can go to learn more about the Foundation that Mickey started in honor of his son Cody” – Kimberly A

“Kyanna is a 3 year old who was diagnosed with stage 4 neuroblastoma in May 2014. She has been going through chemo and underwent surgery to remove a tumor in her abdomen that was growing into her aorta. The whole tumor was not able to be removed due to complications during surgery. She is now having a NG tube placed do to weight loss and not being able to put it back on. She has remained strong throughout her battle and is a true fighter. ” – Renee N

“Laura M is the mother to a now cancer free 5 year old daughter. For the past 3+ years Laura and her family have worked tirelessly to bring awareness and raise money for organizations that support children with cancer. She works closely with BayState Childrens Hospital, Griffins Friends and Camp Sunshine. If she isn’t raising money or awareness with her entire family, then you will find her running races and marathons to bring awareness to childhood cancer. She has inspired close to 1400 people to follow her journey with her daughter and we continue to follow and contribute to her work raising money and awareness for kids with cancer and their families. ” – Maureen R

Acumen Solutions Race for a Cause 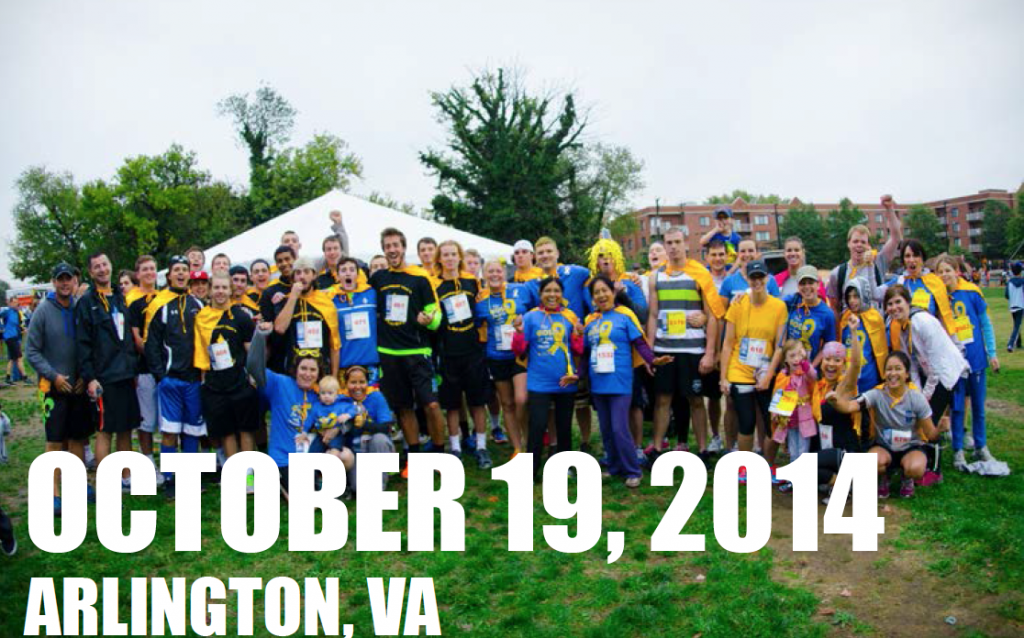 How You Can Participate

The American Childhood Cancer Organization (ACCO) is proud to partner with Acumen Solutions for their 6th annual Race for a Cause™ 8k & 1-Mile Fun Run. We are the nation’s largest producer and distributor of free childhood cancer support materials for families. Give HOPE to children with cancer! Register today and choose ACCO to benefit from your participation! 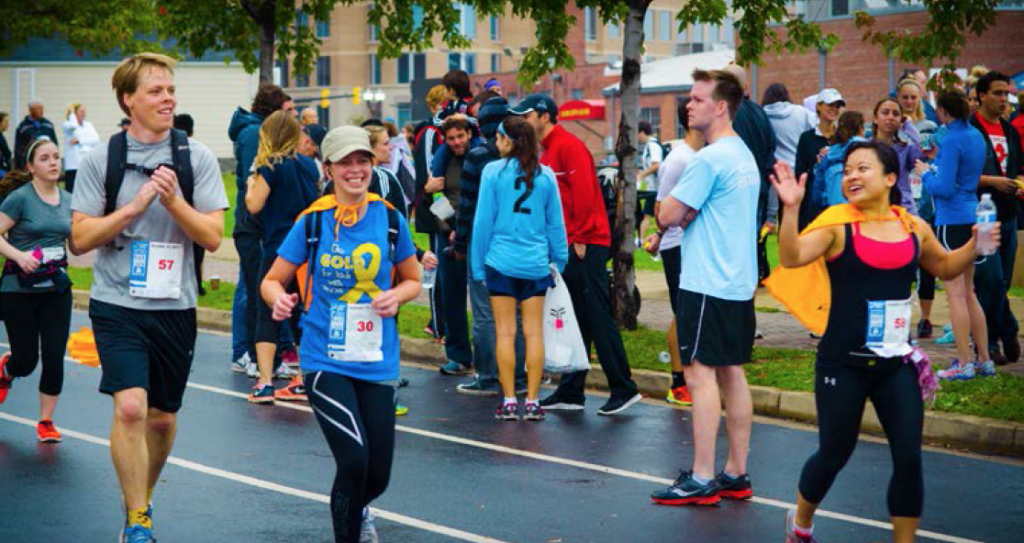 Help support children with cancer by choosing the American Childhood Cancer Organization when you register. The Gold Ribbon is the symbol for childhood cancer, so our theme is “Go Gold for Kids with Cancer!” Be sure to wear GOLD on race day!

“Dylan was diagnosed with a brain stem tumor, which was inoperable. He was such a loving little boy who showed people love. With his smile and friendly nature, he was one of a kind for a 6 year old. Dylan kept his strength and courage up for his parents who thought the world of him. He is a super hero to all the people of our community. When one of us hurts in this awful way, we all hurt. Dylan passed away in November of 2013, with his family and friends by his side. His family and friends are still showing their support to help find a cure for childhood cancer so no other parent has to go through this awful grief. We love you and miss you so much our beautiful angel. ” – Pearl S

“Leah was 16 when she was diagnosed with a GBM stage 4 brain cancer . She had the tumor removed on Nov 26 th of 2012 and it turned out that tumor was encapsulated !
But she still had to go through 32 radiation treatments and 14 month of Chemo .
She finished her regimen on Feb . 24
2014 ! All her MRI’s had been clear of cancer all the way till March of 2014 !
Then during the middle of April of 2014 she started showing weird symptoms , we were thinking that she maybe was dealing with the aftermath of her chemo regimen .
Leah started getting weaker and losing more mobility with every day .
She also had moments of not remembering things , peoples names etc.
She did go to her senior prom on May 3rd . On the Monday after prom she had a doctor appointment , her doctor was very concerned seeing her condition .
He scheduled her next MRI earlier then previously planed .
I got the call from her doctor shortly after : asking me to please sit down:
Leah had a new tumor , this time in a spot that there was no surgery possible !! Also due to the size of the tumor , no radiation possible !
The only option : more chemo to buy her more time ! Hoping for a miracle of course .
Leah declined very fast and within 3 month of her relapse passed away on August 7th 2014!
She was the most caring and loving , fun young lady ! The best daughter a mother could ask for . Throughout her 2 years of fighting she never complained and still was supporting others !
I miss her more with every day” – Gabi G 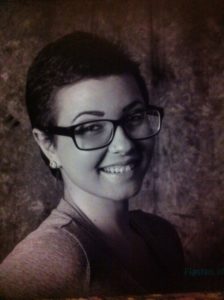 “November 12, 2013 is a day that will be forever etched into our minds.  Arriving at the ER at 6:00 AM, I was determined to find the answers to my daughter Harlie’s abdominal pain.  This was the 3rd Dr. visit in 11 days.  Other off and on symptoms mixed into the equation were fever, cough, runny nose, constipation, diarrhea and throwing up.  The only constant symptom was abdominal/pelvic pain which seemed to get worse with increased activity.  I was so sure this was a case of appendicitis.   After the initial examination and a normal urine and white blood cell count the Dr. ordered an x-ray and CT scan.  5 hours after we arrived at the ER we got the results of the CT.  It was not appendicitis.  I remember being so mad when the Dr said it wasn’t, surely there had to be a reason for the abdominal pain.  He went on to tell me that they found a very large mass.  The mass was so large that it covered most of Harlie’s pelvic cavity.   I was stunned and numb; I was in a state of shock.  From that point I heard about every 4th or 5th word.  We were told to go home and pack and go to the nearest hospital that had a pediatric oncologist, which was three and a half hours away. When we arrived at the hospital it was too late in the day to do a biopsy, so one was performed first thing the next morning.   On November 13, 2013, we were told our 7 year old daughter had Germ Cell Ovarian Cancer.   Nothing in life prepares you for that moment when a Dr. tells you that your child has cancer.  Life is so unfair.   On November 14th, 2013, our daughter had surgery to remove the tumor and her left ovary.  The surgery removed about 90% of the cancer.  They also installed a port into her shoulder so she could receive chemotherapy.    In the subsequent months she had 3 chemo treatments.  A second surgery was performed in February to remove some residual spots that were questionable.  The spots were biopsied and on February 20th, 2014 we were told our daughter was cancer free!” – Jayne C 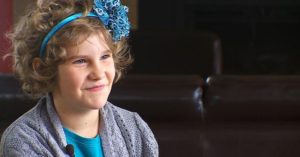