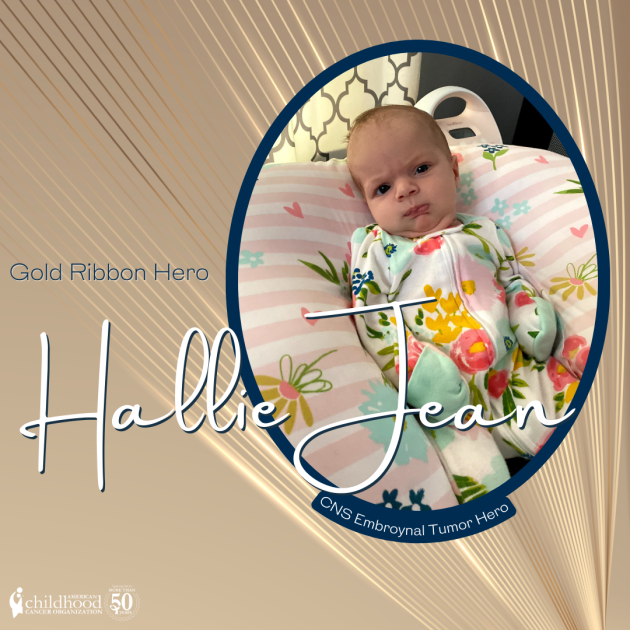 When Hallie was three weeks old she started vomiting uncontrollably and her mother, Erica took notice. While Hallie Jean was under GI tract observation, she threw up. The GI team asked Erica if doctor’s had ever looked at her brain. Thinking this was an odd question, Hallie’s parents allowed them to take a look. An ultrasound and MRI was performed on Hallie Jean’s brain which revealed a mass.

“From then on there were two speeds – lightening fast and torturously slow – as doctors determined the best course of action to help her,” Erica remembers. Hallie Jean’s first brain surgery was on January 13, 2021 where neurosurgeons were able to remove roughly ⅔ of her tumor. A shunt was placed just a week later and that evening Hallie Jean’s parents were given her diagnosis: CNS Embryonal Tumor (NOS). The outlook was poor.

“We were in shock. We had been hopeful that her tumor type would be something curable or be able to be treated with a target approach chemotherapy. Hearing how poor of an outlook this tumor type had made us feel hopeless and alone.”

Treatment plans were minimal due to Hallie Jean’s size and age, but her parents decided to take action and give her a chance. 19 days later, Hallie Jean was taken back to the hospital where doctors noticed her shunt was not working and likely clogged with cancer cells. The tumor had grown much larger and there was a bleed that had started in the center of her brain. Hallie Jean’s parents made the difficult decision to not put her through any more surgeries. Instead, she was brought home with the help of a local hospice group, surrounded by love. Ten days later, Hallie Jean passed away.

Together, we can make a difference. Donate today, “because kids can’t fight cancer alone!®”