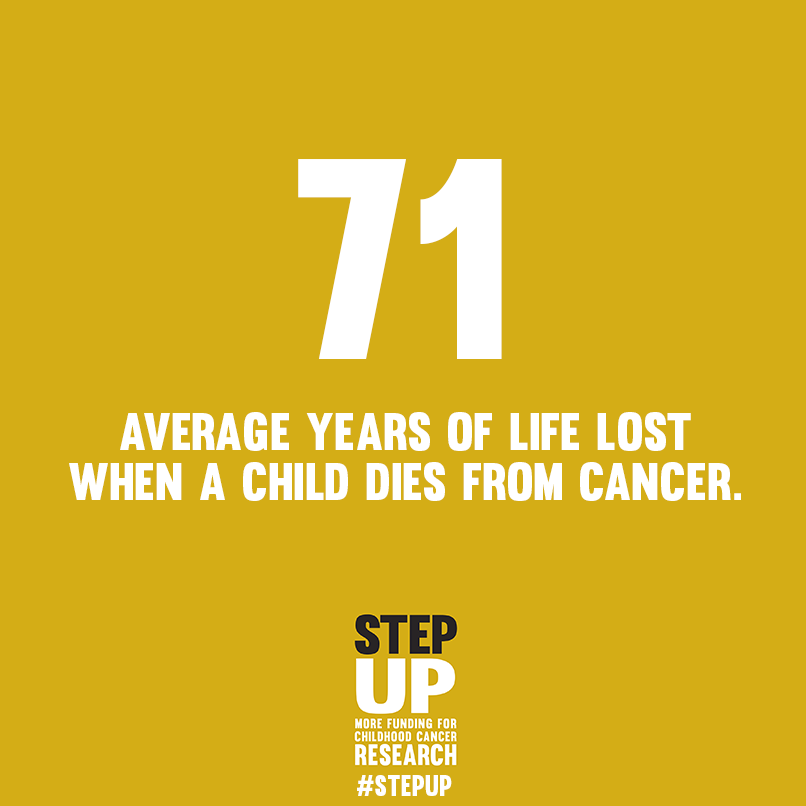 What if she had another 71 years?  Why 71 years? Because that is what I’m told is the average amount of time that is stolen from each child who is diagnosed with childhood cancer. To truly grasp the implications of my daughter’s 71 lost years, you must first understand that Talia Joy Castellano was always different.  From her very first breath, it was clear that this beautiful little being was going to be exceptional, someone truly amazing.

Never one to be rushed, Talia emerged when she was good and ready, her bright, inquisitive eyes assessing her new surroundings with remarkable perceptiveness. 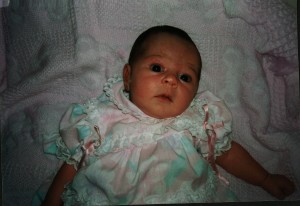 She had this innate wisdom about her that made you feel like you were in the company of an “old soul” who somehow knew that she was here to serve a greater purpose.  Long before the diagnosis, you could just tell that if given the opportunity to rule the world, Talia would have done so—with a fairness and wisdom that our world desperately needs.

Her childhood appeared to progress normally at first, until she started exhibiting signs of recurring illnesses that were difficult to treat.  As with most childhood cancer cases, the initial diagnosis was not cancer, but rather the usual childhood ailments that could explain her symptoms—growing pains, the common cold, ear infections, lactose intolerance, etc…

When Talia was seven, she experienced flu-like symptoms that did not respond to the usual run of antibiotics, and my motherly instincts kicked in.  Something about this just felt wrong, and after a few doctor appointments and a second run of antibiotics, it was time to visit the emergency room.  Looking at the chest X-Ray and seeing a mass, I was gripped with a profound sense of palpable fear and dread. And then they said it…those fearsome words that no one wants to hear, certainly not a mother whose sole mission in life is to keep her children safe . . . “it could be cancer.”  With sweaty palms and a racing heart, I obsessively hovered over the doctor as he ordered the diagnostic tests and surgical procedures that would seal my daughter’s fate. 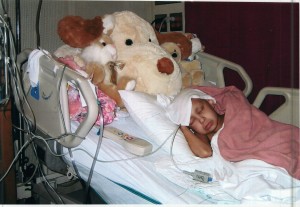 The initial results indicated Lymphoma, and as I struggled to digest this disheartening information the second round of tests and biopsies came back, and the doctor solemnly uttered the words that will forever be etched into my brain, “Talia has neuroblastoma.”  I knew from his grave tone that this was a serious diagnosis, but I had no idea what neuroblastoma actually was, or what it meant for the future of my baby, my precious little girl.  I began making calls to update friends and family who were awaiting the test results, but when I mentioned “neuroblastoma” to my friend who was a nurse, I was met with an eerie silence from the other side of the phone.  It was at that moment that I truly began to panic—what did she know about this horrible disease that I didn’t?

Over the next few months we learned a great deal about the type of childhood cancer known as neuroblastoma, and each new piece of information was always followed with a heavy concern, uncomfortable silences, and demoralizing statistics.  I began to hate percentages, as I learned that because of this cancer my seven-year-old daughter’s chances for survival were horrifyingly low. What was happening?  Why it is happening to my daughter?  So many questions flooded my sleep-deprived mind, and my now frantic searches for more information consumed my entire being.  The numbers must be wrong there had to be more statistics, better ones that would give us hope—the doctors must have missed something. 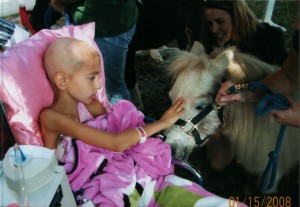 Every day felt as though I was trapped in my own worst nightmare, as I tried to navigate this new, unwelcome life we had been forced into.  The words “your daughter has cancer” echoed constantly in my mind and invaded even my dreams, ensuring that there was not a moment’s reprieve from this disease.  It is difficult to put into words what it feels like to watch as your child is ravaged with surgery, chemo and radiation, and to be powerless to do anything but hold her and love her as she writhed in pain, vomiting up any tiny morsel her sickly body tried to digest. Helplessly watching my daughter’s hair fall out in clumps until she was completely bald and being unable to protect her as her pure and innocent little body was marked with needle sticks, bruises and deep scars from countless surgeries—this is something no child or parent should ever have to endure, just as no parent should ever have to listen to the best doctors in the country give their child a terminal diagnosis.

Ironically, as I began to despair, Talia’s strength and spirit grew stronger. At first it was incredibly hard for her.  Her spirit seemed to become limp and gray as she was dragged along from seemingly endless surgeries and treatments, but then that innate spark from within somehow pushed its way out and she began to fight.  She started to smile again, and to embrace what was trying to keep her down, becoming fiercely determined to make “it” look good.  After a particularly difficult relapse she was inspired to go bald and to use makeup as her wig, putting her beauty guru skills to use and creating makeup tutorials for YouTube from the confines of her hospital and bedroom. These videos allowed the world to see what I had always known, that Talia was a shining star, and that the world was a more beautiful place because she was in it. 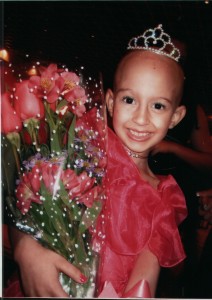 Now that you have seen a glimpse of Talia’s remarkable spirit, we can circle back to the initial question—what could she have accomplished if she had been able to live out the next 71 years? This question crossed Talia’s mind so many times during her short life, but even as she earnestly prayed for her life, she remained committed to making the most of every single moment she had on this earth.

As a mother, I can’t help but think about 71 years of missed milestones. She would have gone to high school.  She would have learned how to drive.  She would have gone to prom wearing the most amazing dress, which she inevitably would have designed herself, with a flawless makeup look to match.  She would have graduated high school and possibly gone off to college.  After a few heartaches, she would have found the love of her life, and together we would have planned an over-the-top wedding with a 20-tiered cake and a dress that could somehow shoot fireworks and glitter into the air!  If you followed Talia, you know that there are an infinite number of possibilities as to what she could have accomplished with another 71 years.  The thought brings a smile to my face even as tears are streaming down my cheeks…

I know with complete certainty that Talia would have drawn from her strength and charisma to garner mass support for the ongoing battle against childhood cancer. I can envision her leveraging her entrepreneurial nature to start some sort of celebrity fashion and makeup line, where all proceeds would be utilized to fund the largest childhood cancer research initiative this world has ever seen. Talia accomplished everything that she put her mind to, and above all else she wanted to find a cure for childhood cancer. In my heart I know that she could have… if she only had 71 more years. 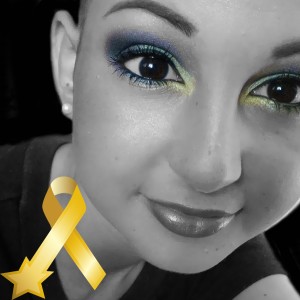 During Talia’s 6 ½ year battle with cancer, she received treatments that were formulated for adults because, due to a lack of funding, there are no new childhood cancer treatments for Neuroblastoma.  A child’s body is not made to withstand the strength of these poisonous concoctions, and the very treatments administered to save her life, ended up triggering the development of a secondary form of cancer (leukemia), which ultimately led to her death.

If, like Talia, you are incensed by the idea of any child missing out on life’s precious moments because of cancer, we ask you to join us in the Step Up: More Funding for Childhood Cancer Research SoundOff campaign, as we lobby congress to secure increased funding for childhood cancer research through the National Cancer Institute (NCI). You can support the Step Up campaign by sending a letter to your Congressional Representative or by tweeting directly at your Senator/Congressional Reps at the SoundOff campaign website (#StepUp). We are not asking for your money—we are simply asking you to add your voice and lend your support to a cause that is devoted to ensuring that no child’s life is cut short because of childhood cancer.

There are many ways for you to help:

Ask Congress to Step Up with More Funding for Childhood Cancer

Today is the launch of the first stage of #StepUp social media campaign, which will run for the next 7 days. We will be posting a new blog post each morning of the campaign with that day’s core message and any supporting documents, visuals, and social media suggestions. From there, you can choose if and how to incorporate the message of the day into your organization’s social media.

Please read to the end – A coordinated community effort is underway to storm Congress – on foot and online.  Childhood cancer organizations throughout the country are joining together, and we’re going to send Congress a message, “Step UP: More Funding for Childhood Cancer Research.” Read Blog…

Almost everyone has a story to tell about childhood cancer.  The odds are you or someone you know has been radically altered by this disease.  Because the fact is, one out of every 300 children in the United States will develop some form of cancer before their 20th birthday, and very few will survive it.

Despite remarkable long-term survival rates for many forms of adult cancers, survival rates for childhood cancers remain disturbingly low.  But these miracle cancer treatments are sadly ineffective for childhood cancers, which are more aggressive and stubbornly resistant to surgical or chemical remedies.  And children’s young bodies are more sensitive: the harsh treatments required to kill cancer cells, even when successful, often lead to secondary cancers or long-term disabilities.

You CAN help!  If you are dedicated to beating childhood cancer in all its forms, join us as we storm Congress and demand that they fix this inequality and give our children a chance to survive this terrible childhood disease.  Childhood cancer organizations throughout the country are joining together, and we’re going to send Congress a message: “Step UP: More Funding for Childhood Cancer Research.“

There are many ways for you to help:

This week, as advocates travel to Washington D.C. for Action Days, and supporters from home make their voices heard loud and clear, we’ll take one step in a long journey towards more federal research funding and better treatments for kids with cancer.

Please be a part of this coordinated community effort.

The Team at The American Childhood Cancer Organization

The Alliance for Childhood Cancer