As you take part in Halloween festivities this year, please keep in mind that many families are spending this holiday with something equally spooky: childhood cancer. You can help support our nation’s childhood cancer patients by Trick-or-Treating for the American Childhood Cancer Organization.

Click Here (or the image below) to print the flyer. 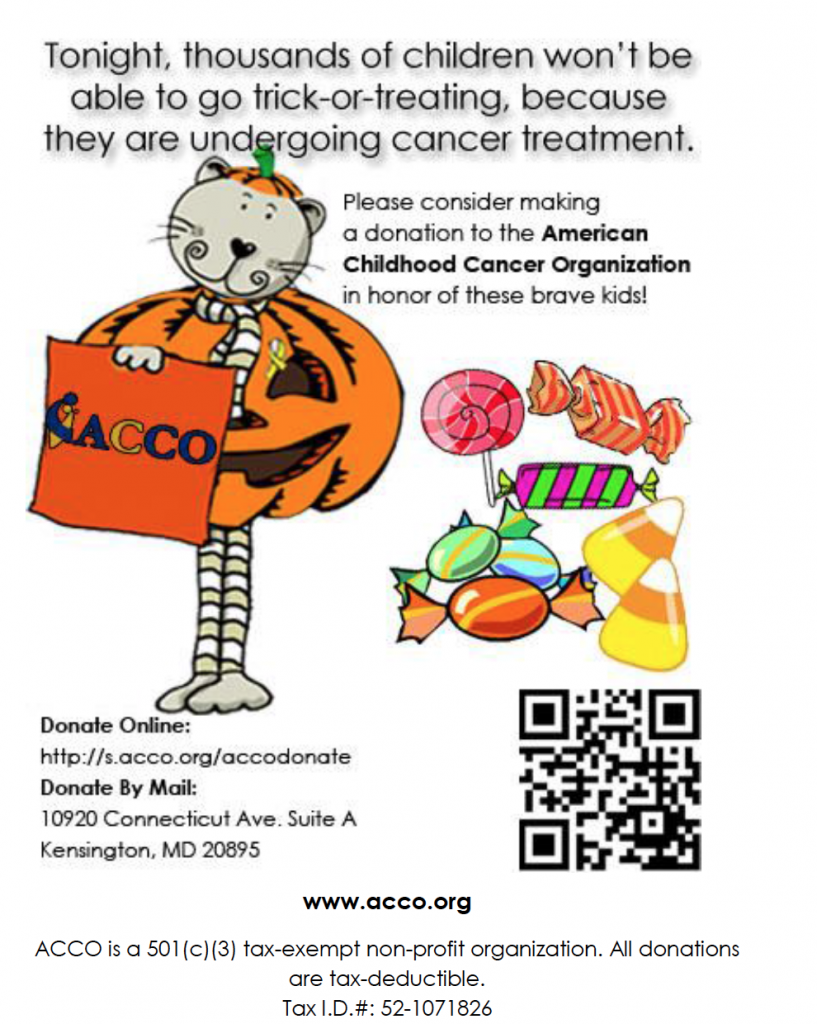 Thank you! Your support is greatly appreciated.

“He never let his illness, stop him from doing all the things he use to do!!! During treatment at hospital, he turned a quiet hospital to a child’s fun parade as soon he woke up from port access surgery!!! Amazing strength this 5 yr. Old possess.” – Makeasha M

“My daughter Destiny is my hero! She has endured so much since the diagnosis of osteosarcoma of her left mandible last year. After numerous rounds of chemo and surgeries, she is currently cancer free. However, removing the tumor left her disfigured and she continues to wear a mask to avoid judgement from society. She’s my hero because despite all of this, she returned to school and is active in her community. She knows that her beauty exudes from within and I want the world to know how strong and amazing she has ALWAYS been, especially to me. ” – Faith C

“Nathan was dx with osteosarcoma in 2010 he endured high dose chemo, limb salvage and back into high dose chemo, with a great prognosis Nathan finished his treatments. Nathan’s cancer returned within 6mos in both lungs at the time of telling Nathan he had cancer again and he was going back into chemo instead of thinking of himself his first thought was all about the other children and families again, and he was determined to make a difference. Nathan requested we start our own organization to make that difference to aid in helping and making awareness and helping to fund research,and we did, in the time leading up to our finalization he went through multiple surgeries to remove the tumors from both lungs and back into high dose chemo as time went on we had to stop treatment due to organ hardship, we had to make a choice between the cancer or his organs, in all this Nathan was focused on all the other kids, he was determined to make friends with them and be there knowing their dx was terminal, the pain he would endure loosing one friend after another to childhood cancer it was agonizing to watch but he just kept on making new friends over and over it just was not about him. Nathan is currently what is called NERD No Evidence of Return Disease and 2yr OT but watched very carefully as he is a very high risk relapse rick now, the Dr said it’s not “if” it’s “when” for Nathan, the organization was finalized recently and Nathan is ecstatic and very eager to start getting to business. He goes to the hospital at least 2x a week every week and see’s oncology every 3mos still, he’s been in PT for almost 4yrs 2-3x wk and when Nathan is at the hospital he takes his free time his own time and goes and hangs out with the kids that are in patient. It’s not about him in his mind it’s about the children, the other children and their families. Nathan was dx at 9, relapsed at 11 and now 13. He’ not only just our hero but our super hero <3″ – Kim S

“Joseph is 11 years old and was diagnosed with a brain tumor. He’s had surgery on Aug 12 2014 and is now going through radiation therapy at Procure. He’s a very strong young to go through this” – LaDonna R

“Raised £8000 for teenage cancer trust. Fantastic support to his his sister who has cancer” – Alice L